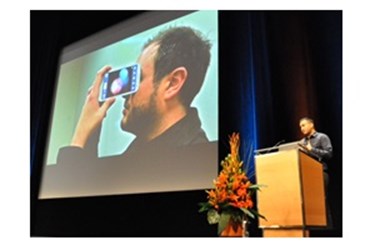 SPIE Optical Metrology (SPIE OM) and the SPIE/OSAEuropean Conferences on Biomedical Optics (ECBO) plenary speakers covered applications of light-based technologies ranging from monitoring air pollution and preserving valuable artworks and cultural sites to “seeing” through walls and imaging with ultrashort pulses. A biomedical hot-topics session highlighted developments in areas such as tissue imaging and disease and treatment monitoring, and discussed translation to clinical use.

The conferences were held in conjunction with Laser World of Photonics at Messe München.

Hell explained how optical microscopy can peer into the workings of cells in a minimally invasive manner, describing particular techniques that allow the use of ever-decreasing light intensities to study phenomena at high resolution on lengthening timescales.

Betzig discussed results obtained with photo-activated light microscopy (PALM) and his contributions to super-resolved fluorescence microscopy, the development for which he, Hell, and W.E. Moerner (Stanford University) were recognized with the 2014 Nobel Prize in Chemistry. Expanding the context to super-resolution and other enhanced resolution techniques, Betzig illustrated how various modalities each provide valuable means by which to examine living samples.

Every photon has a story, noted Ramesh Raskar (MIT Media Lab) in his SPIE OM plenary talk. Diverse work done in his lab illustrates how uncovering those stories deepens understanding of the possibilities made available with light. Reconstructing paths taken by photons undergoing multiple reflections allows for determining scenes in cases without direct line of sight, or "seeing” around corners, and using time-of-flight measurements allows for reconstruction of the scene behind thick diffusers, in effect, "seeing” behind walls. High-speed femto- and nanosecond photography allows visualization of light in motion and of plasma formation. Combined with a smartphone, the appropriate illumination scheme allows for a mobile way to conduct retinal scans.

In the Optics for Arts, Architecture, and Archeology conference, John Delaney (U.S. National Gallery of Art) described how reflection imaging spectroscopy provides both spectral and spatial information to enable applications such as pigment analysis to test for authenticity and aid in restoration, and identification of images underneath the surface.

Femtosecond pump-probe microscopy, already known for its use in biomedical imaging, can help identify age of a painting, provide details about the firing process of pottery, or study mold growth, said Warren Warren (Duke University) in another talk in the conference. Variations in pump-probe decay signal readily permit differentiation between pigments.

Kishan Dholakia (University of St. Andrews) spoke on the growing popularity of light sheet microscopy for imaging in the life sciences, in the conference on Optical Methods for Inspection, Characterization, and Imaging of Biomaterials. Using Airy beams for single-plane illumination microscopy provides a rapid, wide-field-of-view imaging scheme with low sample phototoxicity, enhancing resolution and field of view.

IYL2015 was in the spotlight at a luncheon for SPIE Fellows and students, with a talk by IYL2015 steering committee chair John Dudley, and an evening reception. Both events were cosponsored by the European outreach program Light2015 and SPIE Europe.

Photonics industry watchers received an update from SPIE Industry and Market Analyst Steve Anderson on the latest data from the ongoing survey by SPIE.

SPIE is the international society for optics and photonics, an educational not-for-profit organization founded in 1955 to advance light-based science and technology. The Society serves nearly 264,000 constituents from approximately 166 countries, offering conferences and their published proceedings, continuing education, books, journals, and the SPIE Digital Library in support of interdisciplinary information exchange, professional networking, and patent precedent. SPIE provided more than $4 million in support of education and outreach programs in 2014. http://www.spie.org